If you go by just expectations alone iPhone 5 is already super hit even before an announcement of the phone from Apple. After the antenna gate of  Apple iPhone 4,  there is a huge expectation on the next version of iPhone, and going by Apple’s plan in the last few years we should have a new release of iPhone in June-July 2011. But then again going by the tone Steve Jobs set in iPad 2 launch we may not see a huge change in hardware from iPhone 4 except  the antenna.

Another question is whether Apple will call the new phone another version of iPhone 4 like 3GS for 3G.  With not many new enhancements a subversion of iPhone 4 will be the correct approach but again they may want to completely forget the iPhone 4 episode and jump to iPhone 5. With the new A5 processor confirmed to be available for next version iPhone, it is most likely to be christened iPhone 5.

Another factor in the recent months is Japan earth quake and Nuclear disaster which could push Apple’s schedule at least by few weeks if not by few months. And Apple’s have said they dont have any roadmaps from Apple for new product line, but again considering that iPhone 5 may not be much different from iPhone 4 and could be a more refined product, the information leak possibility is also reduced.

So lets wait and see if we get to see the new iPhone 5 this summer.

Steve Jobs was back on stage at the Apple’s event today and introduced the iPad 2 with iOS 4.3. iPad 2 will be available from march 11, and so do iOS 4.3.

The new iPad gets a dual core A5 processor which has 2 times faster output and 9 times better graphical output, it also gets Video camera. iPad 2 gets even thinner than iPhone 4 at 8.3 mm (from current 13.4 mm) thin. The new iPad is also weighs 30% less from the original one.

The iPad 2 is priced exactly same as the original and extracts 10 hrs battery life out the device and a month of standby. Apple also introduced a splitter cable allowing HDMI output while charging the iPad all at the sametime.

Also on the show was a cover launched for the iPad2 which can be folded and used like a stand and protects/cleans the screen.

The much anticipated iPad 2  is going be introduced on March 2 at an Apple event,  but there has been several speculations and rumours, starting with delay in production to iOS 5. But lets not get too ambitious on this.

Well one thing which is almost confirmed is the impending announcement about iPad 2 on March 2 event, after the not so obvious invitation sent to journalists last week.

The following are some of the most expected additions/upgrades 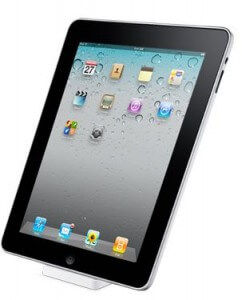 – Certainty is an upgraded processor in the lines of iPhone 4 (ARM).
– Higher resolution , but Retina eye display might be a stretch , but lets see if Apple surprises.
– No 7 inch iPad for now.
– Front facing camera
– CDMA addition to support Verizon.

We might get some new features but at the end of the day Apple could just add the Verixzon support and just lay out a
plan for 2011 just like they have mentioned in the invite.