Apple is going to introduce iPad in India from friday onwards, where sales would be done through retailers instead of offering service plans by mobile operators. The 3G service to iPad will be provided by Bharat Sanchar Nigam Limited (BSNL) as for now 3G data plans for the iPad will be provided from telecom circles like Chennai, Andhra Pradesh, Maharashtra, Gujarat, Rajasthan, Kolkata and UP. The iPad comes with dual camera, high resolution display and with faster processor. The available capacities are 16 GB, 32 GB, and 64 GB either as Wi-Fi only or Wi-Fi with 3G.

While considering the price 16 GB with only Wi-Fi version is for Rs 27,900, 64 GB Wi-Fi with 3G is for Rs 44,900 and while we look at the data plans like pre-paid with 6 GB will cost Rs 599 for a month and if the limit is exceeds it will cost 1 paise for each 10 KB, the other plan is for Rs 999 with unlimited browsing, and there is a plan for people who use 3G rarely that is for Rs 99 /day. And these plans are not for contract so you can activate or cancel it any time. 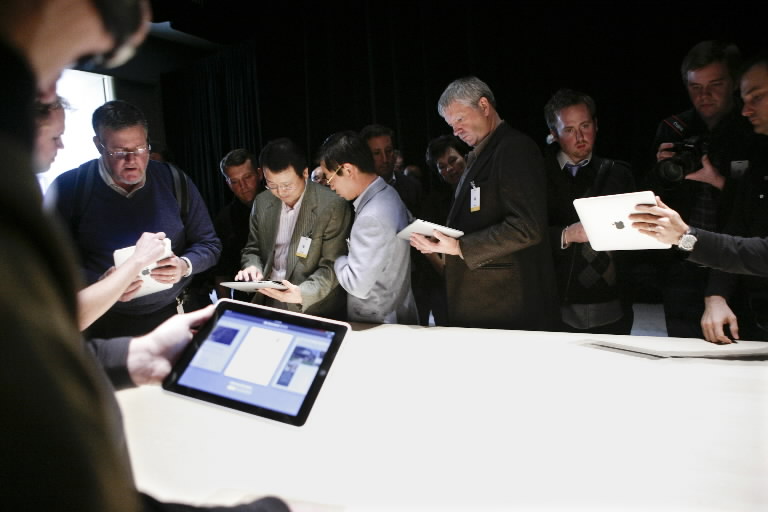 First comment immediately after unboxing the iPad is that some felt its little heavy as like other HP notebooks.But the pack was initially having all the accesories along with the keyboard.But ofcourse iPad is really sleek and weight less in the tablet computer series

Some felt uncomfortable in holding the iPad.But may after days pass by and because of its features comfortness would really not matter.

If complete multitasking is enabled in iPad then there are many chances that laptop might get replaced with iPad to a great extent.But for now there is no effective multitasking in iPad though there are plans to include the same in future.

With iPad its now very easy to carry your entire reading library wherever you go like as you do with music and videos with iPod/iPhone.

Greatest comment is that users who have purchased iPad feels that its really fast and browsing is really made easy with single command and swipe transitions are also really good and effective than iTouch.

With iPad not supporting Adobe flash and with some websites not reliable in small netbook screens some felt difficult to view and read contents in iPad on some of the websites.

Though iPad can be used more or less like a laptop when viewing movies,reading books and playing games.But there is a really difficulty in using word,excel or powerpoint for classroom and business purposes.The problem is that there is no local storage of files.You should mail the documents and open the same from the mailing applications.So iPad is now really very useful in receiving all sorts of files like word,excel,video files,e books but not very comfortable in doing a new one

Easy synchronisation of data with iPhone ,iPod and iTune

Some users have commented that its now easier to sleek,thin and less weighing device than to carry a netbook.But it all depends upon the task you do with the netbook.If you are mostly engaged with surfing emails,reading books,sending and receiving mails etc then iPad is a great choice.

With Apple’s own browser Apple safari many feels that browsing is really very fast and there seems to be a great transition with single touch.Magical touch screen gives a great impression about iPad

About the keyboard – Many feels that its easy to type with the virtual QWERTY keyboards and comfortable than all the smartphones.