Tired of spinning that steering wheel and driving the car on a road.Thanks to this German researchers,they have developed a new technology that lets drivers steer cars using only their eyes. 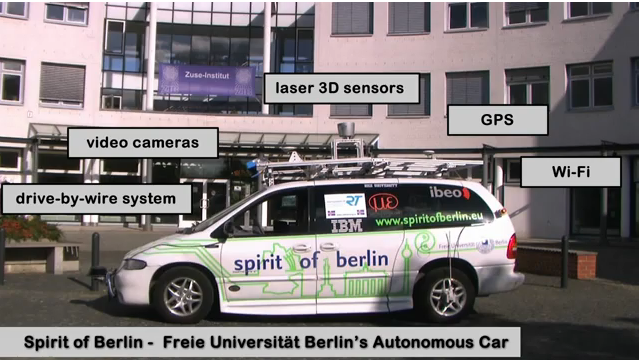 Raul Rojas, an artificial intelligence researcher at Berlin’s Free University, said that
the technology tracks a driver’s eye movement and, in turn, steers the car in whatever direction they’re looking.Rojas and his team presented the technology-packed prototype under a clear blue sky at an airport in the German capital.The Dodge Caravan crisscrossed the tarmac at the abandoned Tempelhof Airport, its driver using his line of sight to control the car. The car’s steering wheel was turning as if guided by ghostly hands.The technology called eyeDriver lets the car drive up to 31 mph (50 kph).The Demos remain simple as of now.
The Dodge chases pedestrian or another car across the tarmac and shows his agility and even drives backward — the driver only has to look into the rear mirror to guide the car.However, it remains unclear when — or if — thetechnology will be commercialized as questions about safety and practicability abound: What about looking at a cute girl next to the road for a few seconds? Not to mention taking phone calls or typing a text while driving.