We are back with the Processor Comparison, this time with the popular mid range i3 series processors Intel Core i3-380M vs Intel Core i3-2310M. i3-2310M is based on the newer Sandy Bridge micro-architecture released first in January 2011 compared to the old Arrandale (based on Nehalem) Micro Architectures.

The Major advancements with the new architecture apart from 10-20% CPU performance is a marked improvement in the graphics capabilities of the new Gen processors. From the Integrated Graphics the model changes to Processor Graphics with newer Sandy Bridge Processor. But in terms of Fabrication process both Intel Core i3-380M and Intel Core i3-2310M follow the same 32nm process. 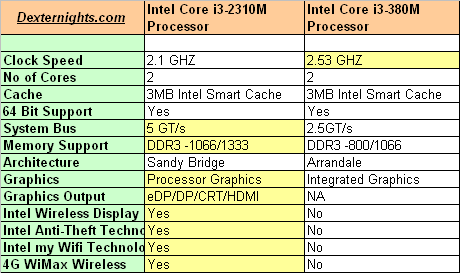 The newer chip Intel Core i3-2310M gets some advanced features like Intel Anti-Theft Technology, 4G Wimax technology, Intel myWifi etc. But whether most laptops have the capability to use these features is questionable.

In terms of raw clock speed i3-380M has 2.53GHZ vs i3-2310M’s 2.10GHZ, but the new performance improvements should nullify any concerns. Both have same cache memory of 3MB. With native Graphics support, ie Processor Graphics i3-2310M will perform much better without a separate Graphics card.