Google Plus (Google+) has made a lots of buzz recently with its limited invitation only service. With so much of Social networks around, Google+ comes around as yet another Social network. After its failures with Google Buzz and losing users from Orkut, Google has finally figured out the best recipe for a Social Network, i.e. Facebook.

Google+ at a high level is a simplified (for Good) version of Facebook. The uncanny resemblance of the UI, placement of buttons and key functionality like Wall,+1 Button etc are all borrowed from Facebook. Even the friend suggestions, ways to share media in the wall etc are modeled on Facebook. 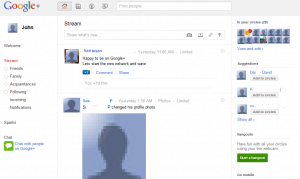 But something which appears new is the concept of Circles, ability to control who sees your posts pictures, by default Google Plus gives circles namely Friends , Family , Someone Met etc.  If you would have used Orkut, you would have seen the same  concept but not on forefront.

Google is expected to add tools and Games soon, before the full release of the Service later this year. There will also integration with Android and Gmail very soon.

Google has integrated its Google Profiles into Google Plus and you don’t need to enter all your profile information all over again. You can use your Gmail id (Google account id)  for signing up, completely eliminating the signup process for existing Google users .  Google also have integrated Picasa into the Google Plus (rather forcibly), I would have preferred  having a choice of not linking the Picasa account on Google Plus, but didn’t have a choice. Already complaints are popping up from users who accidentally deleted their Picasa albums from Google Plus.

Along with the above “Tight” integration, Google’s announcement that Google Profiles will be deleted if not made public by end of July is another  one of those thingies, which wont go well with “Do No Evil” philosophy.

Add all this to millions of Gmail users, Picasa users and Google search users, then you have a very compelling fan base for a successful Social network. And also a recipe for Anti-competitive practices scrutiny and  complaints of unfair bundling of Services , Microsoft was accused of earlier.

Most likely Google+ will succeed , not by pure innovation but by the control over internet and  its existing user base. But also make some of the competitors to join hands in tackling the Internet Giant like the way Google was sidelined during the Nortel Patents.

We havent seen any official response from Facebook on Google Plus,  though Mark Zuckerberg is the most circled man in Google Plus. Wonder whether Facebook will file a Trade dress complaint on the lines of Apple against Samsung for copying UI. Well it may not apply to Web, but why not?