Apple in a bid to threaten competitors from mimicking the ‘i’ devices,  have files a litigation against Samsung for Patent Violation, Copying design , User Interface and Style of its iPhone and iPad. Unlike many other patent suits unlike against Nokia and HTC this time it is more Vague, but nevertheless once again proves that US patent system is growing trolls than innovation. 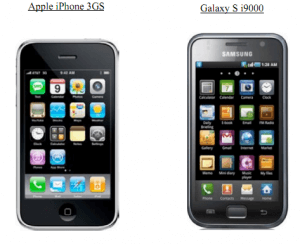 Apple has complained about shape of the devices, packaging and icons being copied from Apple. Some of the complaints include copying the the “rectangular shape, the rounded corners, the silver edges, the black face, and the display of sixteen colorful icons”, “rectangular handheld mobile digital electronic device with rounded corners” and “rectangular handheld mobile digital electronic device with a gray rectangular portion in the center, a black band above and below the gray rectangle and on the curved corners, and a silver outer border and side”.These are all covered in the US registration Apple has filed for its trade dress registration (Similar to patents but for look and feel).

Ridiculous wordings aside some of Samsung’s Galaxy line surely include a resemblance to iPhone/iPad. But then again Samsung had its F700 and LG had Prada before Apple’s iPhone hit the market. And industry in General has moved and Apple itself have taken many of the features from various existing devices. If having rounded icon was a problem, Apple should be the infringer, because there were many other devices which had icons.

U.S. Registration No. 3,886,196 covers an icon that is green in color with a white silhouette of a phone handset arranged at a 45 degree angle and centered on the icon that represents the application for making telephone calls

U.S. Registration No. 3,889,642 covers an icon that is green in color with a white silhouette of a speech bubble centered on the icon that represents the application for messaging

And the registrations for its music,Photos,Contacts which all have elements which are generally used in the industry. Going by the nature of trade dress registrations, Apple wouldn’t have been able to launch a phone if Nokia,Blackberry et all had filed registrations diligently.

Apple also claims that Samsung has infringed 10 of its most outrageous patents (Maybe half Apple’s patents are of this nature). The list of infringed patents include the following

7,669,134 (the “’134 patent”) Method and Apparatus For Displaying Information During An Instant Messaging Session

6,493,002 (the “’002 patent”) Method and Apparatus for Displaying and Accessing Control and Status Information in a Computer System

7,469,381 (the “’381 patent”) List Scrolling and Document Translation, Scaling and Rotation on a Touch-Screen Display

With the nature of lawsuits in the mobile and Software space over patents , Microsoft’s battle with i4i assumes more significance to reduce the number of irrelevant and blatantly Generic patents. Also will increase the need for refining the patent law especially related to Software and Communication.

One Reply to “Apple sues Samsung for copying its Innovation”