Many tablet computers are getting released in the market after iPad is released and each country is having their own affordable tablet computers.But all these tablets have similar look and feel of iPad though they have many additional features and sometimes even with less price when compared to iPad.Now its the turn of Asus to release its own tablet computer Eee Pad however it was only competent with e-readers like Nook and the kindle.

Asus is going to give a tough competition to iPad as it has many different features than iPad.Asus is a Windows 7 based device.Asus is also releasing two versions of Eee Pad.One is termed as EP101TC and other as EP121. 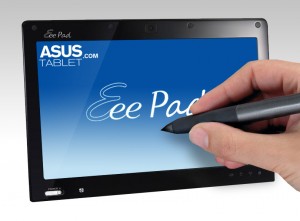 Inspite of all these features Engadget has had some hands on with the device and it has termed as the device is “barely working”.They have seen that EP121 was not all booting.Though the functionality and performance is under question,the UI of the models looks attractive and the touch screen also worked great.But as per their comments Eee pad still need to go long way in terms of functionality