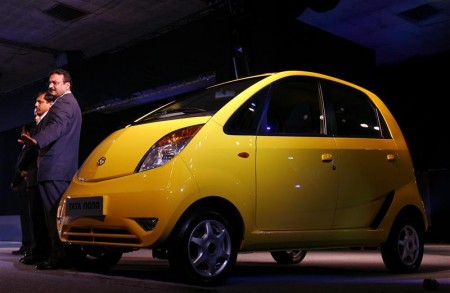 1500+ news articles in a day or two of release, and all major publications in the world have put a special section and NewYork Times went in detail speaking with the vendors(suppliers) to find out more about the car, what else can you ask for? I have went through atleast 100 so articles of every possible country the ones from US,UK,Austrlaia,African Nations,China,Singapore… and almost all Indian articles and video clips. I still want to read more about this car..or is it more about India’s growth. Most western publications has mentioned turning of the tide and waning of Detroit.

Many have compared this unique event eith the revolution Model T(Ford’s) brought into the world.Others remind us of the days when Japanese auto makers stunned US Auto giants. But then everybody agrees one thing TATA Motors is going global in Big way, setting tone for future Indian strides.Till now India has been seen as a good service provider but not as a innovator, TATA has stepped into the new level occupied predominantly by Western powers/Japanese.

This is a second achievement for TATA Motors after indigenously developed TATA Indica, which has successfully replaced AMbassador and entered Global Markets like UK and South Africa.Perhaps the Acquisition of Jaguar and LandRover might spur TATA’s sales worldwide(ie if they olan to market in other geographies), but TATA Nano has definitely mad the world look at TATA Motors.

The TATA Group has a points system for its group of Companies and TATA Motors has consistently occupied Top spot over TATA Consultancy Services (TCS) and other companies(TATA Steel,TATA Tele etc), and no wonder they are able to keeo up the topspot.

Every now and then all the TV channels are showing how a typical middle class family travels in India, and you dont need anybody to vouch for that, we have done it we have seen it. In this context Ratan Tata’s dream is real and not a financial one.

People have already started complaining that this car is having less power, may not work out as a good option and even will not enter other regions of the world. But then it is more clean than a typical bike, much safer to take your family than in a bike.. fuel efficient car compared to its US gasoline guzzling monsters.

The car is targetted at replacing the bike and not for the one who longs for style and austhetics in a car.But saying that I don mean this car doesnt have either. Nano is built for the city with lower turning radius and less space constraints this is a very good option for wading through traffic and small streets.Maybe other variants in future might provide extra features.Thats enough for the Specs/Tech details.